The Advanced / DHCP/DNS page allows you to configure advanced settings for the DHCP and DNS services for the LAN and WAN. Most of this functionality is provided by FreshTomato's dnsmasq module. 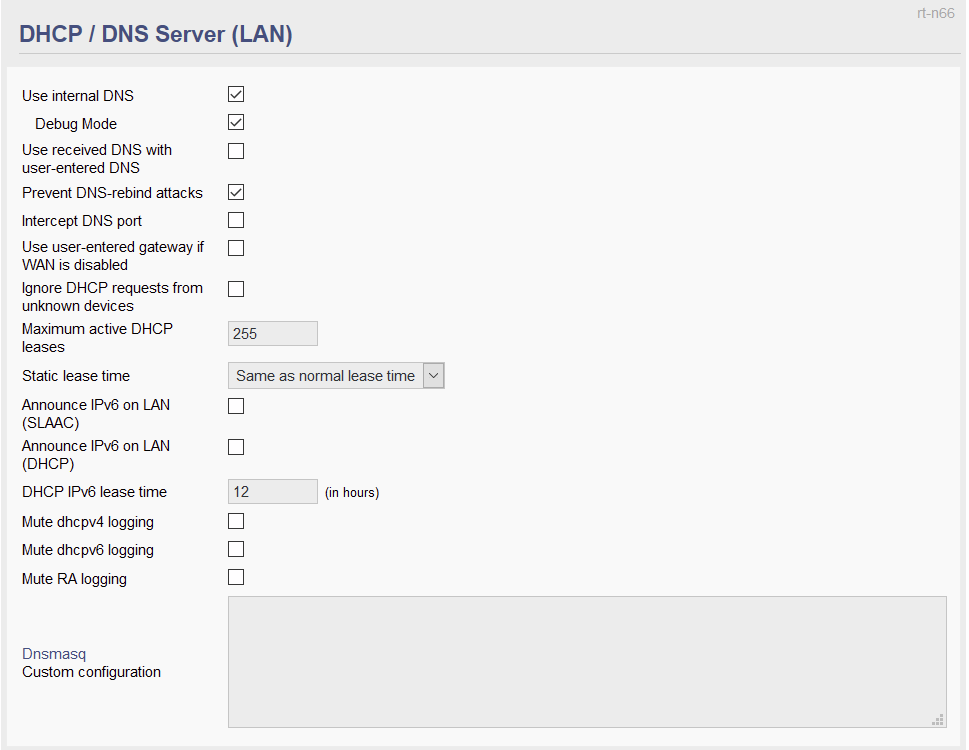 Announce IPv6 on LAN (SLAAC): Enabling this turns on router advertisements for IPv6 Stateless Address Autoconfiguration (SLAAC) protocol. This allows hosts to self-configure an IP address with minimal contact with a server. The client sends out an RS (router solicitation) ICMP packet. The nearest router responds with a RA (router advertisement) packet. The client uses the IPv6 prefix provided in the RA packet as the first 64 bits of its address. It then derives the last 64 bits of its address using the EUI-64 process or a randomization algorithm.

WINS (for DHCP): Here, you can specify the IP address of a WINS Server which will be given to DHCP clients. NOTE: This does NOT actually enable the WINS service. FreshTomato's WINS Server function is enabled on the USB and NAS/File Sharing menu.

The extra bytes appeared to be entirely padding, and not necessary. FreshTomato developers eliminated the padding, which reduced udhcpc's DHCP discovery packet size to only 331 bytes. This 331 byte size eventually became FreshTomato's default setting. This way, udhcpc can successfully obtain a DHCP lease from a provider which might have DHCP relays. It may be possible that some users may not be able to obtain a WAN IP address unless they disable this feature, however. (Default: Enabled).