The Virtual Wireless menu allows you to create and modify virtual wireless interfaces for virtual wireless networks. This is useful for creating things like guest networks, (for questionable/unfamiliar users). It's also useful for creating separate networks for IoT (Internet of Things) devices. IoT devices are often untrusted in terms of security. 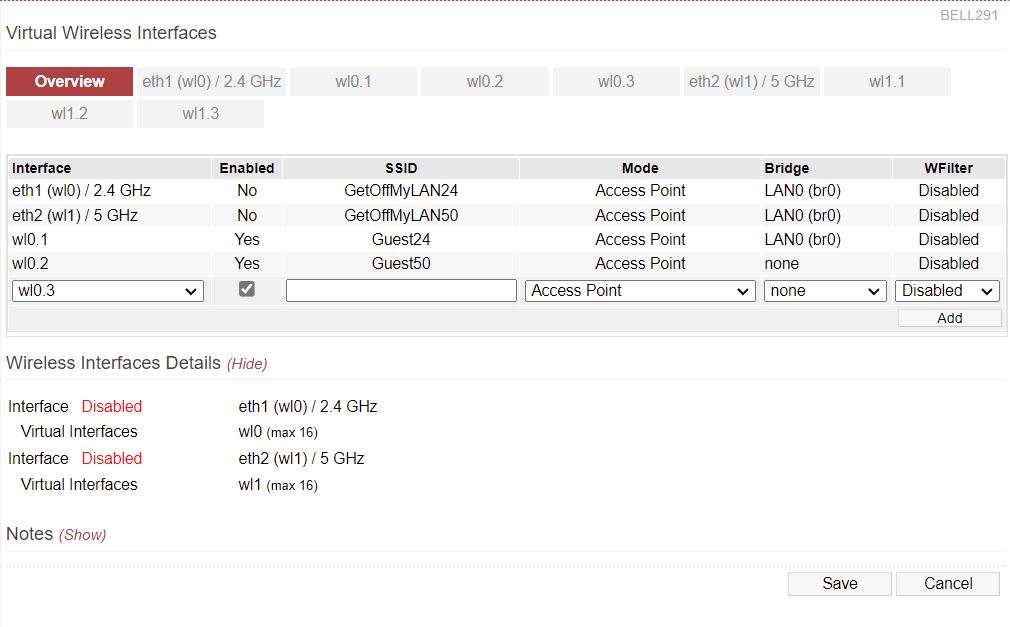 Enabled - Whether this VIF should be active and brought online

For details on Wireless modes, please see the “Wireless Mode” tables on the Network wiki page.

Bridge - Allows you to select to which LAN bridge this VIF should be assigned.

The more virtual interfaces there are, the more possible SSIDs you get and the less throughput is available to each client (though this is hardly noticeable for up to 4-5 virtual SSIDs).

When saving changes, the MAC Addresses of all defined non-primary wireless VIFs could sometimes already be set, but might be recreated by the wl driver (Broadcom's proprietary wireless LAN driver). Thus, previous settings might need to be updated/changed accordingly in the Advanced/MAC Address menu after saving settings and rebooting your router.

FreshTomato's web interface allows you to configure a maximum of 4 VIFs for each physical wireless interface available. You can define up to 3 extra VIFs in addition to the primary VIF (on devices with multiple VIF capabilities).

Configuration settings for the primary VIF of any physical wireless interfaces shouldn't be adjusted in this menu. For that, use the Basic/Network page instead.