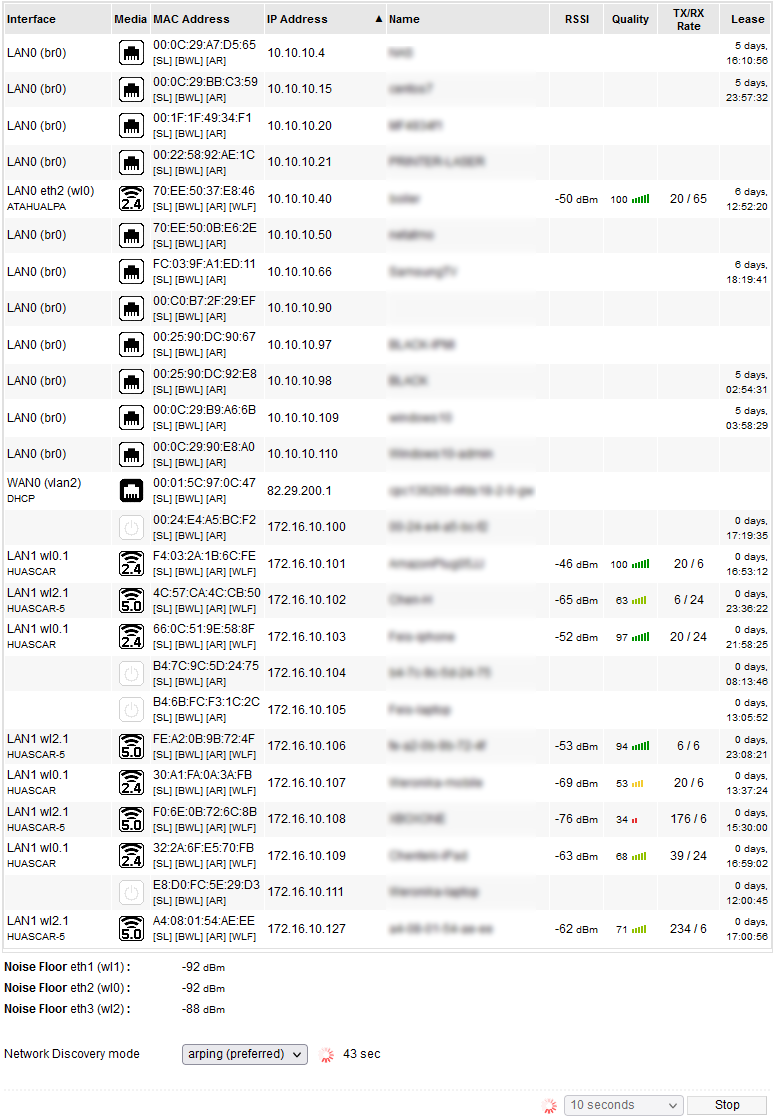 Interface reports details of the interface on which the router sees the device. Since release 2021.3, this includes physical and logical interface name, and wireless SSID.

For WiFi-connected devices, the SSID they are connected to will appear under the interface name.

Lease displays the time remaining before the DHCP lease expires. The lease time text is also a hyperlink; clicking on it allows you to delete the current DHCP lease from the database, and deauthorize the device (if it's connected via WiFi). This can be useful when creating static IP reservations, to make connected devices refresh their previously automatically-assigned IP to the new, manually-reserved one:

On the 2.4GHz band, common sources of interference include Bluetooth devices, cordless phones, wireless headphones, low-quality power supplies, microwave ovens, etcetera. On the 5GHz band, there are typically fewer sources of interference. One source of interference is DFS (Dynamic Frequency Selection) but for specific channels only. DFS is a WiFi function that enables 5GHz WiFi to use frequencies that are generally reserved for radar. Ironically, DFS was designed to reduce interference, not increase it. DFS interference varies, depending on the country/physical location of the equipment. If you suspect your interference is due to DFS, please see Wikipedia's List of WLAN Channels for details.

Measure: On certain (mainly MIPS-based) devices, there is an extra button to trigger the measurement of Noise Floor (interference). For more information on the noise floor, see the Wireless Survey menu.

Network Discovery: Starting with release 2021.4, a network discovery function was introduced. It is disabled by default. If enabled, it will remain set for the length of the web interface session, although actual scanning/discovery will stop as soon as you leave the Device List menu. Network Discovery can be set to use the Linux arping command or the traceroute command. Essentially, the function scans all the IP addresses in range to try to accurately populate the Device List table. Arping is the preferred setting, as it's faster and lighter on resources. However, sometimes, such as with Apple devices, traceroute appears to perform network discovery more precisely.